Urban Mining: The Hidden Treasures in Your Smartphone

The world’s growing appetite for electronics is causing an increase in demand for many important metals. As a result, the traditional methods of mining them from the Earth’s crust are becoming increasingly environmentally unsustainable. ‘Urban mining’ is a newly developing way of recycling our old gadgets as an alternative source of metals.

Our smartphones need a surprisingly large variety of metals to work effectively. Some you may be familiar with: copper is used for wiring, silver is used in buttons and screens, and gold is used in electronic switches. In fact, 7% of the world’s gold is thought to be found in old, unused gadgets! Some of the metals used are less well-known. Tungsten and dysprosium are used to make phones vibrate, and terbium and yttrium are both used in screens. The electronic gadgets that we throw away – known as ‘e-waste’ – are full of all these different metals.

The mining of many of these metals is complicated though. 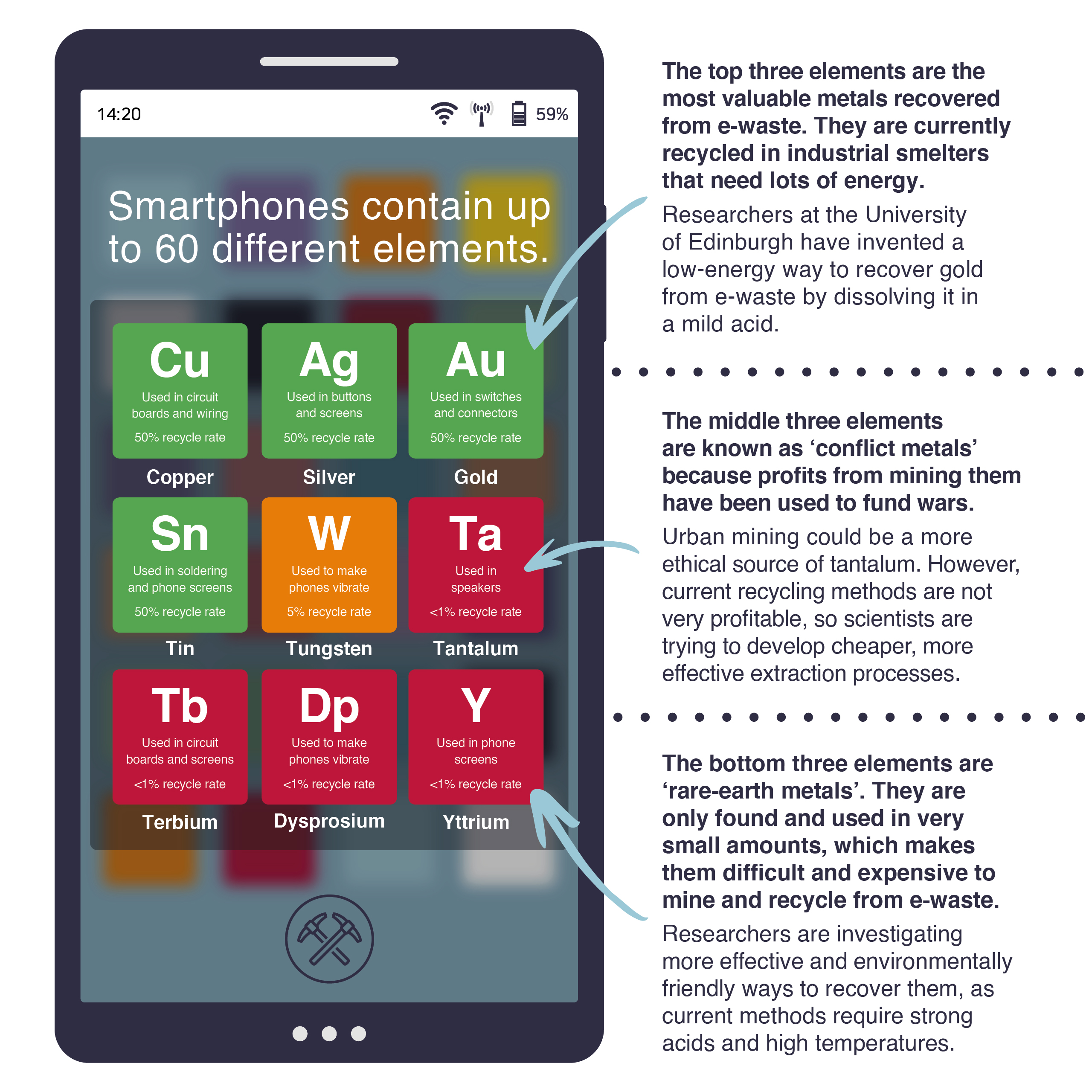 Tungsten and some others are known as ‘conflict metals’ because one source of them is the Democratic Republic of Congo, where profits from mining have been used to fund wars.  Other metals found in our phones are known as ‘rare earth metals’ because they are only found in very low concentrations in the Earth, making them difficult and expensive to mine.

Urban mining takes our old gadgets and removes the metals for recycling. This could be a more ethical source and reduce demand for the conflict metals, and provide an easier route for supplying the rare earth metals. To do this effectively, though, we have to find recycling technologies that work well.

For example, gold is currently recycled through industrial smelters that use a lot of energy. Researchers at the University of Edinburgh have invented a low-energy way to recover gold from e-waste by dissolving it in a mild acid. Methods like this need to be developed for all the different metals for urban mining to really work.

Smartphone design can also make it difficult to recycle components afterwards. Modern smartphones are not easy to take apart at the end of their lives. The solution could be for manufacturers to transform their current ‘take, make and dispose’ model into a circular process that prioritises reusing, repairing and recycling existing products. This new model is known as a circular economy, and focuses on how we reuse as much as possible from the products we make.

Urban mining our gadgets is just one way we can introduce a circular economy. Everything we make has the potential to be reused, from food waste to homewares and clothes. Recycling what we use in this way will help us avoid using up the planet’s resources. So next time you upgrade your phone, remember the hidden treasures inside it!

Glasgow Science Centre's new permanent exhibition, Idea No59 celebrates the innovative spirit in us all. On your next visit, come and explore the exciting process of taking ideas and bringing them to life. 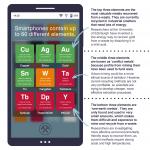 Previous Article
Growing Up Green! How Vertical Farming Inspires the Next Generation
Next Article
Tales for Tomorrow: Storytelling and the Climate Crisis