Steve Owens, resident astronomer at Glasgow Science Centre’s planetarium, explains why all you need to do is look up for the ultimate festive light show…

As Christmas approaches, the city sparkles with festive lights but the dark nights of winter offer an even more spectacular display. There is a treasure trove of stellar sights overhead. All you need to do is wrap up warm and step outside.

Many of us have been spending more time outdoors during the pandemic. Stargazing is a great reason to get outside during the chilly winter months too. In the city, the trademark Glasgow weather and light pollution from streetlights obscure our view. However, if we are lucky enough to enjoy a cloudless night over the festive season, there are still a few exciting sights to see from the city. Best of all, you only need your eyes to enjoy some stargazing.

At this time of year, people frequently ask me about telescopes as gifts. Telescopes are wonderful things but it is a myth that you need one to enjoy some star spotting. One thing you do need (apart from a cosy hat and gloves) is patience. It takes time for the human eye to adapt to the dark so allow a little bit of time for your vision to get used to the night- at least a quarter of an hour. You will be rewarded by a slowly unfolding game of shimmering join the dots. 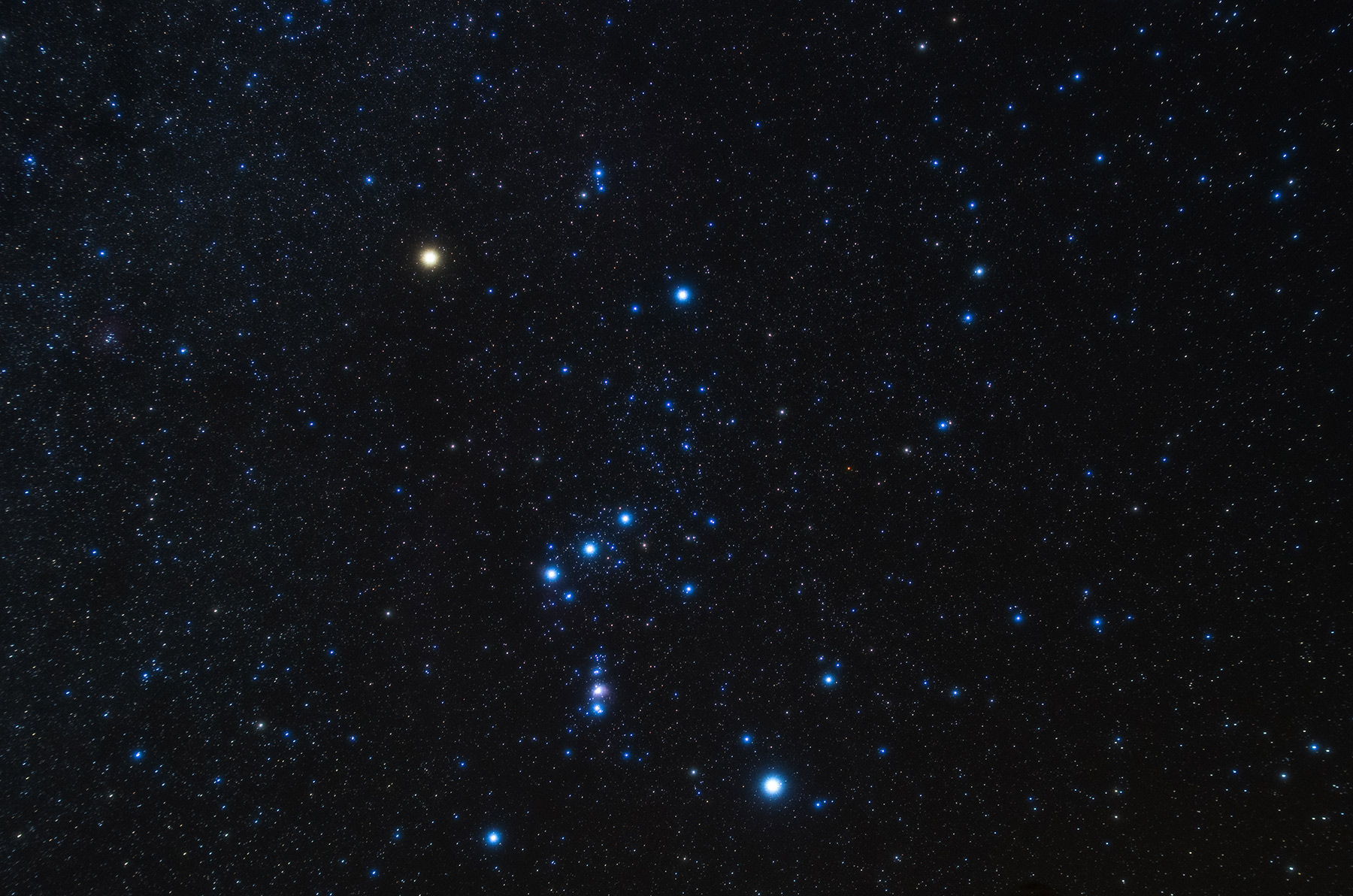 The stars overhead form patterns called constellations and we have used these to tell stories ever since people started gazing at the heavens. Children love to play a game of spotting different shapes which seem to sail in the sky overhead. One of the most famous winter constellations is Orion the Hunter (pictured above).

Orion looks like he is striding though the sky, his belt twinkling. You will see him high in the south of the sky from mid-evening during the winter. The stars of Orion’s belt form a handy heavenly road map. Looking up and left from his belt, you will see Orion’s shoulder. This is the red supergiant star known as Betelgeuse. This star is a billion times bigger than our own local star – the Sun. Orion’s left foot also points down and left to Sirius – the famous dog star and the brightest star in all the night sky.

Stars sparkle but planets shine. Around one hour after sunset, you can spot three glowing planets – Venus, Saturn and Jupiter in the southern part of the night sky. You will have been able to catch this trio during the first week of December. People are always surprised that you can see five planets with the naked eye. The fourth planet you can spot in the night sky this month is Mercury. Its closeness to the Sun means that it is often difficult to see but later in December you should be able to spot it to the left of Venus.

(Always make sure the Sun has set completely before attempting to spot any planets – looking at the Sun directly is dangerous.)

If you head out of the city, you will be able to leave light pollution behind you and if it is a crisp night, you can enjoy some of the world’s finest dark skies just a two -hour drive away from your doorstep. Galloway Forest Park has been designated by the International Dark-Sky Association as only the fourth Dark Sky Park in the world, and the first in the UK. It offers astoundingly beautiful dark skies. From such a dark location, you can see a twinkling blanket of stars. You will be able to see the Milky Way and spot meteor showers sparking across the sky. The Geminids’ meteor shower peaks on 14th December this year.

Of course, you don’t need to go that far to see a perfect night sky free from pollution and unaffected by the Glasgow rain. Glasgow Science Centre is home to the Glasgow Planetarium where a state-of-the-art star dome offers the next best thing- guided tours of the heavens above from a comfy reclining seat. During the Festive Science weekend of 18-19th December, The Planetarium will be running festive-themed star shows (with something for even the youngest stargazer).

Wherever you choose to stargaze, the dark nights don’t last forever. The shortest day is 21st December before the Sun starts its long voyage back towards Spring and Summer and lighter nights. The last year has seen some dark days for many but the stars overhead are a constant nightly comfort- a little bit of light for everyone to enjoy.

This blog post is adapted from an article that first appeared in Glasgow Times in December 2021.